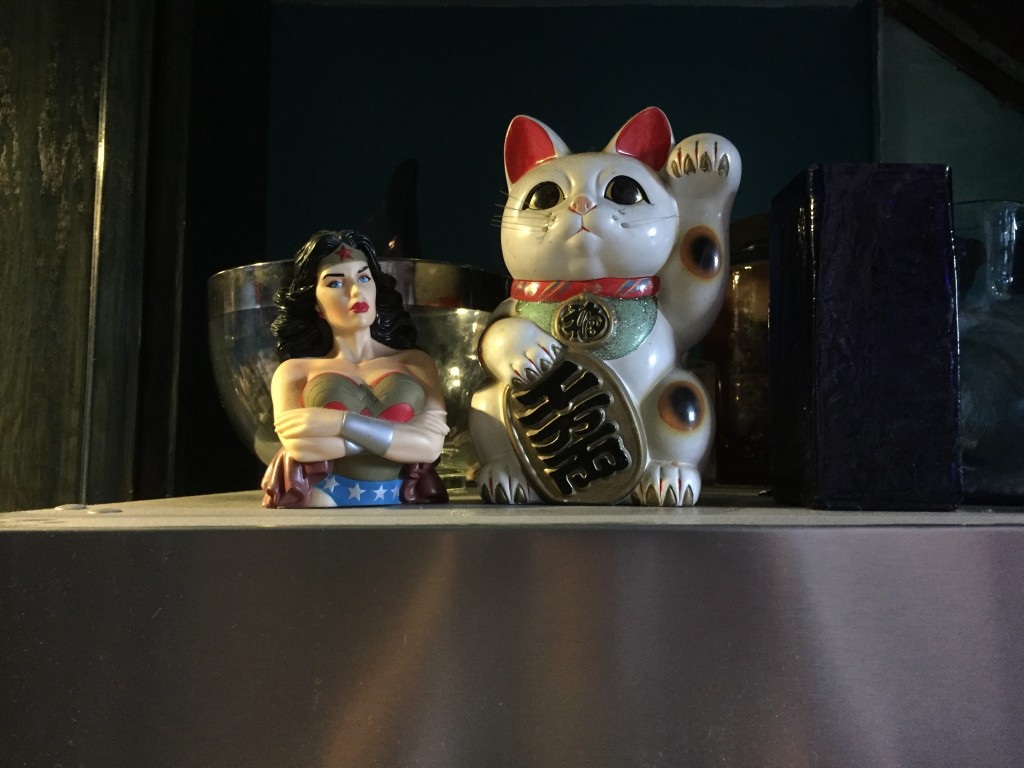 I got distracted by a ramen fiasco but when we parted ways a couple blog posts ago I was headed over to my friend Giuliana’s for a shower and an oatmeal making session. Here’s what happened.

I stopped by the restaurant where she was working so I could grab her keys. A stunning place, it was a former hotel lobby with a large open ground floor with a second level around the perimeter. Type of legitimately grand space that exists in real cities. From Giuliana’s description of how it’s run it reminded me of a midtown NYC French place called Orsay, a restaurant that got a two-star review in the 90s when I was in full NYTimes foodie mode – pre-internet, the Wednesday Dining In/Dining Out was my weekly hit of food news and recipes, this was before you could find out everything all the time. It’s where I learned how to cook, one “Minimalist” recipe at a time, and where I read about new places to eat. 1

Mid-twenties in New York City, could there be a better time or place? Not for me.

I made a reservation, gathered some people, and had a perfectly okay meal, the only thing I remember is that my sister loved the steak tartare, which was in fact really good. Orsay was the type of place I would never order steak tartare now, my hindsight recollection is that it was a soulless business endeavor and people were there not because of some overarching mission or to be part of something great, but because they needed jobs, just like at BlankBlank Ramen. Even when I know and trust the cooks in the kitchen it’s hard enough to suspend care regarding sanitation and raw beef, so in a place where there’s no love? No thanks.

Most of this mini-flashback to twenty years ago took place just now while writing, but there was a hint of it at the restaurant while I was waiting at the upstairs bar for Giuliana and her keys. I had a commanding view of the entire ground floor and was enjoying the dance that’s so fun to watch, even when it’s a little painful: runners dropping food at tables without pausing to describe it, a server rushing past a wanting guest on her tunnel-visioned way to a computer, the manager walking behind the bar to pour himself a soda water, getting in the way of the busy bartender (as managers always do, no matter how polite or respectful).

I received the keys from my generous friend and though a part of me wanted to spend my fourth night in the van, I headed to her place figuring I could get a jump start on what I needed to do. Also, in her baller loft space on the industrial outskirts of downtown LA she has a bed-sized leather couch. I thought I’d see how it slept.

I got there around 10:30 and in her compound that night a party was happening; I had to park my van/home/95% of what I own many blocks away in a super-sketch area amongst truck parking lots, on-ramps, and abandoned buildings. As I put together the many items I would need for my tasks – my oatmeal has about ten ingredients, and I was making a big salad as well – out of the corner of my eye I watched a burly dude watching me from across the street. He seemed like he was waiting for something but it didn’t exactly feel like an Uber situation and though I may have imagined that he backed into the shadows, it seemed as if he didn’t want me to know/remember that he was around.

I gathered my bags of food, clothes, and toiletries and made my way to Giuliana’s loft, nervous about leaving my van. My two bikes were on top, locked up but exposed, and even though I have renter’s insurance, who wants to deal with that hassle? I have the bikes with me because I use them. Also, my van cost $1100. I don’t carry whatever insurance it is that covers broken windows or stolen vehicles.

In this uncomfortable state I approached the bouncer guarding the gate to Giuliana’s place: I live here, what’s happening? He said, Cool man, come on in, chocolate and art show, going on til 2. I dropped off my things and went to check out the party. Sounds cool, right? I pictured booths of artists showing their work interspersed with artisinal chocolates to taste, and how lucky for me to be the guest of a resident as this is going on? So lucky!

Or not. Insanely crowded, loud band, long line for the bar, and a longer line for the single chocolate offering – a cascading fountain of artisanal chocolate into which two people at a time held underripe strawberries.

Five minutes of that scene was about four too many. Back at the loft the temperature was the same as it was outside, which was the 50s. The art show punk band sounded like it was right outside the door, because it was. 11:35. I fled.

Reunited with my still-intact vehicle, I found a residential area 10 minutes away, parked, and spent night four sleeping warmly and soundly in my van. I think I’ve mentioned how much I love sleeping in that thing, and through sickness and health, I continue to love it. Back to Giuliana’s the next morning, I found a spot right outside her place, convenient for the multiple trips I ended up needing to make between the loft and the van (where are those mangoes? I know I have some). I spent Sunday morning preparing food, cleaning myself, and listening to music. Thank you Giuliana. 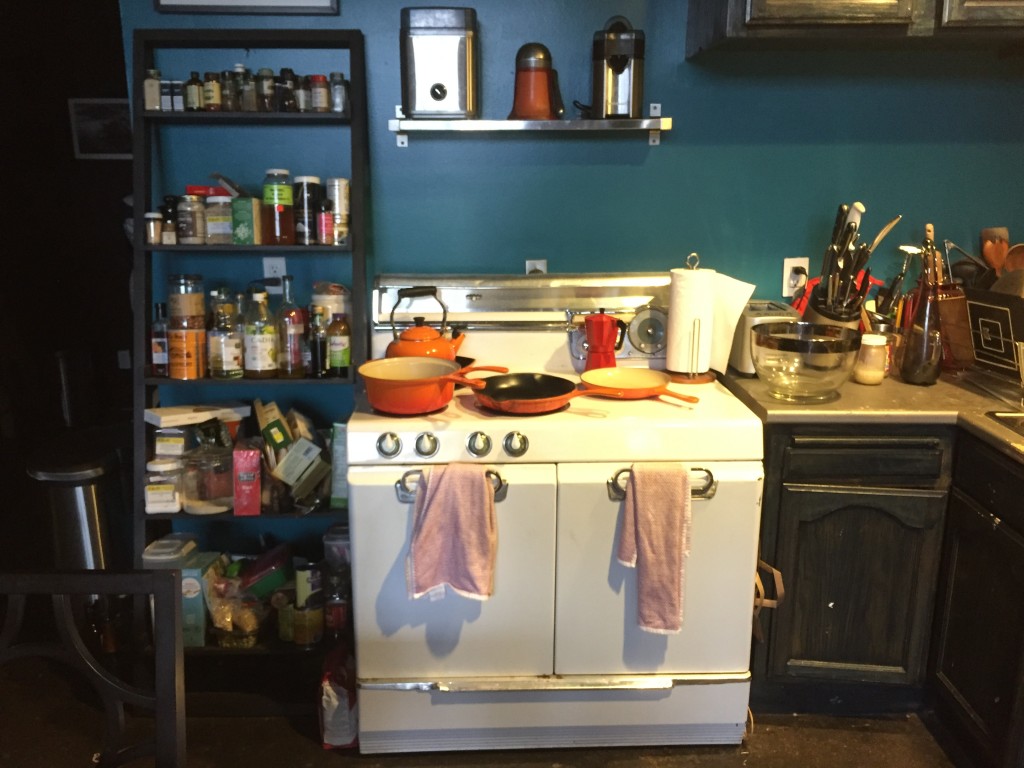 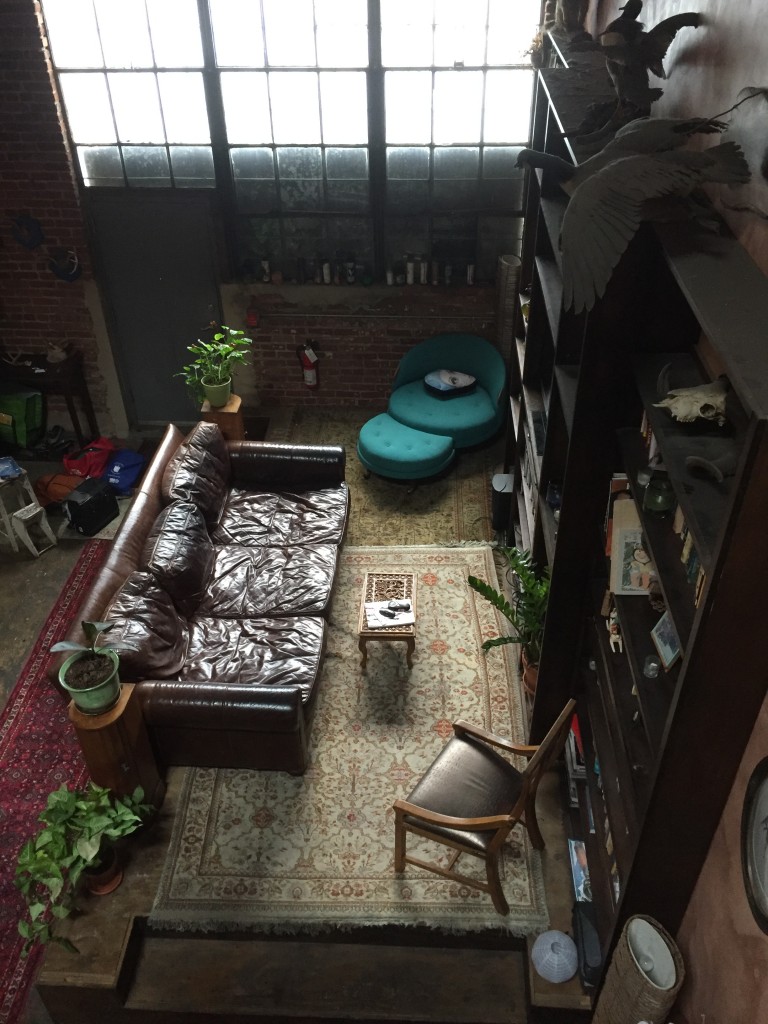 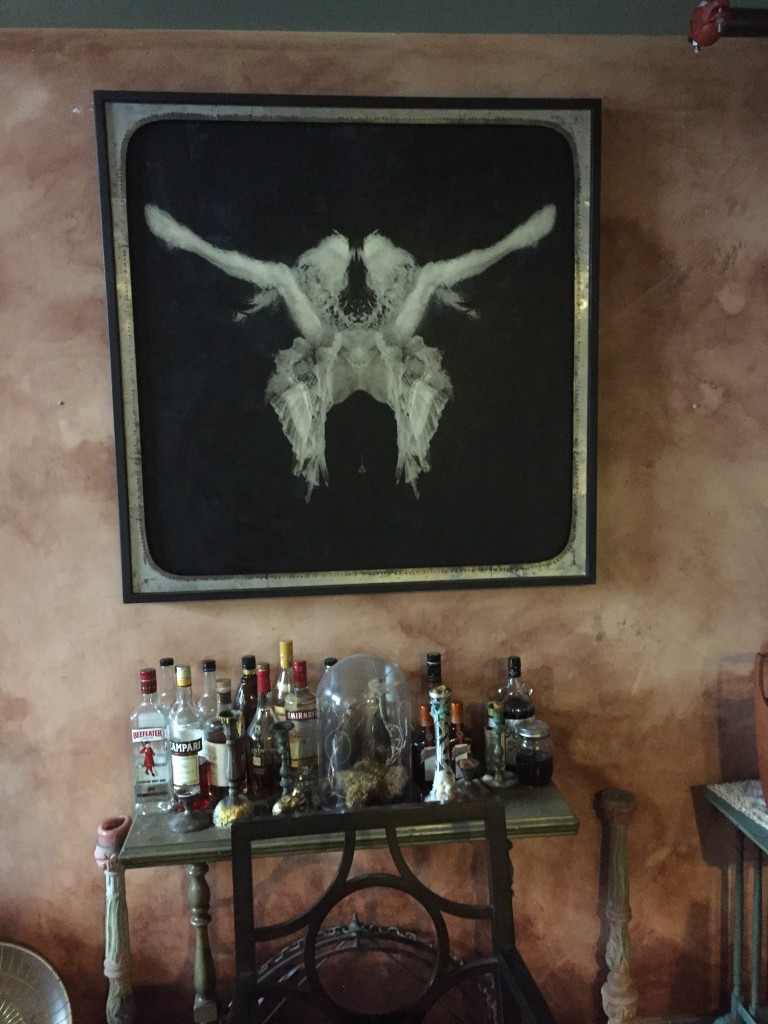 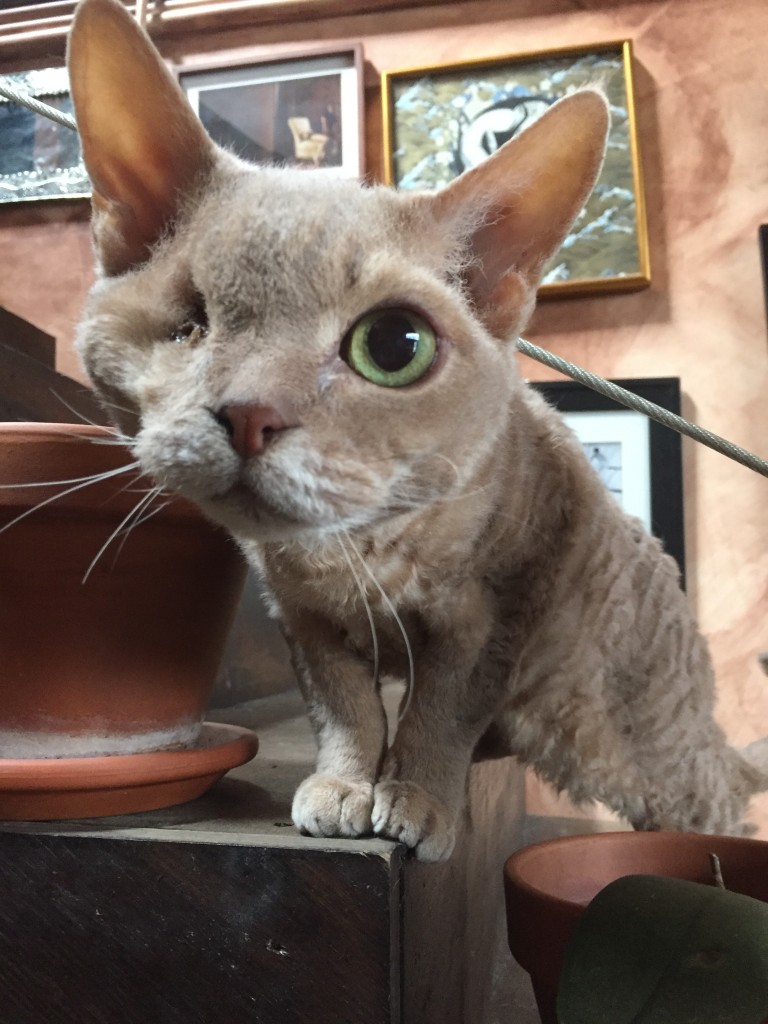 The salad I made that day (as well as the title of this blog post) was a riff on and a regression from Free the Picnic’s Parking Lot Salad. (If you only have time in your life to read one blog, read theirs.) “A riff on” because it uses thinly sliced Brussels sprouts and cauliflower. A regression from because 1. It’s not nearly as pretty, and 2. They used mango in theirs, inspired by the idea of currants; I thought I had some dried mango but didn’t (must’ve eaten the whole package) but I did have currants. And I had some mole. And some wild rice I wanted to use up (as opposed to their farro). So overall it’s a very different salad, probably not as good as theirs (just like my photos), but good nonetheless. Here it is, homage-paying title and all. 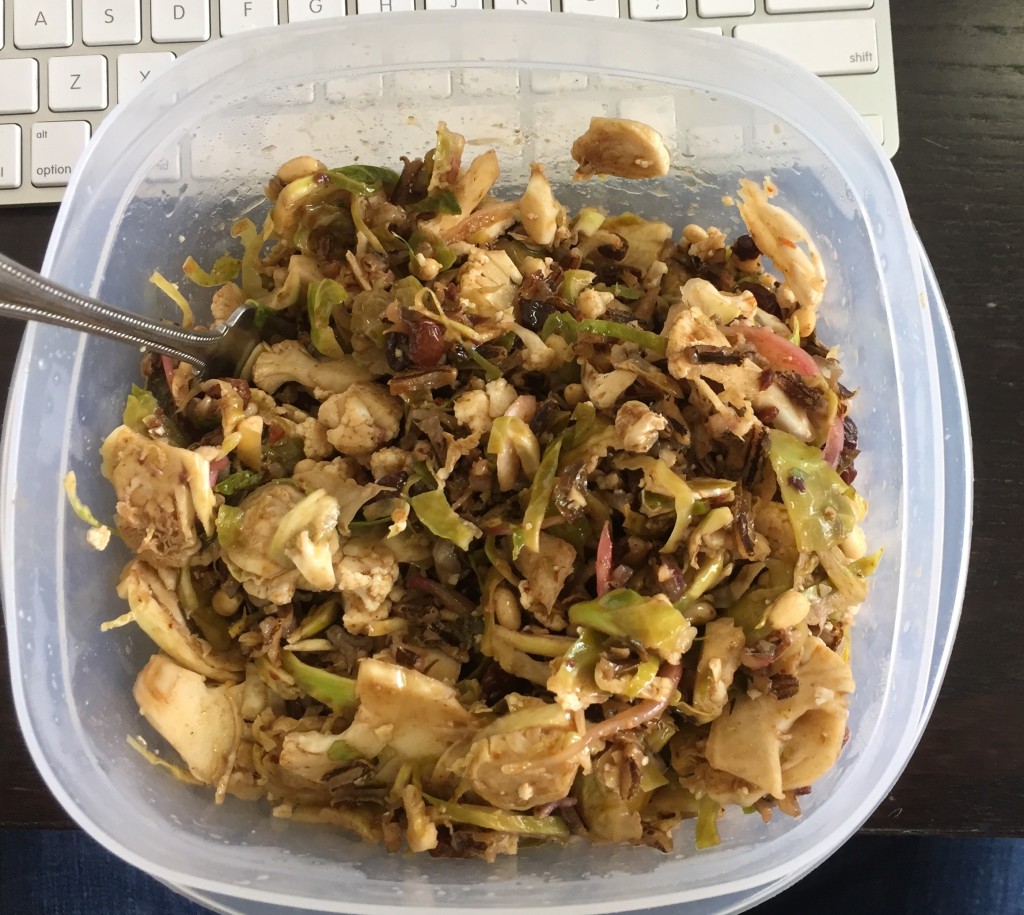 This is enough for four to six servings. I ate it for three lunches and left some for Giuliana as well.

1. Thinly slice the Brussels sprouts and the cauliflower using a knife or a mandoline. I used a knife because it’s what I had, and I enjoy using it. (If you have a mandoline – a tip that was given me after I once cut my thumb on a mandoline blade was to wear a rubber glove if you have one. Just a thin disposable glove – it’s enough protection that the blade will bounce off and won’t cut you.)

2. Slice the red onion in half through it’s poles; lay it flat and slice “vertically,” to form thin crescents (not through the poles this time, but from one pole side to the other).

3. Cook the rice in 3 or 4 cups of water. Unlike white or brown rice, you simmer wild rice in ample water until it’s tender.

4. Drain the rice and reserve a cup of the cooking water.

5. In a bowl that’s much larger than necessary for the contents, toss together the Brussels sprouts, cauliflower, onion, rice, currants, and pine nuts.

6. Make the dressing, either with a whisk in a bowl or in a container with lid and shake ‘er up: combine the mole, a teaspoon or more of chili paste, olive oil, lime juice, red wine vinegar, and rice cooking water. Salad dressing is a personal thing and I like mine more acidic than most people; a common ratio is 1:3 acid to oil.

7. Pour the dressing on the salad and toss thoroughly and gently. This is why your bowl is so large.

8. Chop the mint, add to the salad, toss gently one more time.