A few hours ago I faced down a guy trying to steal one of my bikes; consequently I have an adrenaline surge keeping me from sleep.

Now it’s 2am and I’m in a Starbucks knock-off called Tom N Toms Coffee. The only 24 hour cafe in the city, as a night owl this is something I’ve been having a hard time coming to terms with. There are 24 hour coffee shops, as in diners, but no place where you can pull a laptop out and do some work.

A year ago I was in Saigon where all-night demand was so high there were multiple chains of places open 24 hours, and they were packed. I was in one of them at 4am on a Tuesday with at least a dozen other people, a cheesy movie on tv, cafe sua da (iced coffee with sweetened condensed milk) served with a bottomless iced tea chaser, and a food cart serving Vietnamese street snacks outside. Coffee shop, or heaven on earth?

No surprise then that the place I’m in is Asian-owned as well as being located in LA’s Koreatown. I went to a Tom N Toms [um, sic, for the record] once in Chiang Mai; it wasn’t as dirty as this one, and the wifi was much better. But the one in Chiang Mai is a little far, the bad wifi is good for not getting distracted, and my van (loaded with bikes) is in the Tom N Toms parking lot, guarded over by a crack security team named Omar (more on him in a minute), something important to me given incredibly recent events (more on those in a minute).

Also, the music is welcomingly horrible, meaning I’m happy to be wearing earphones, the same way I’m happy to do so at the Yellow Deli in Boulder. Fun fact: Boulder CO, a city of 80,000, has the exact same number of 24 hour cafes as Los Angeles CA, population 13,000,000. (An update on that in a minute.)

Another fun fact, for me anyway: I’m back on coffee after maybe four months off. “Managed” it by limiting intake to weekends the past few weeks but now that I’m not working a job and am on my laptop more often, it’s been daily. I temper my intake with tea and sparkling water – not in the coffee, but rather than ordering cup after cup I’ll have coffee, then some tea, then some sparkling, or whatever. Anything to not be non-stop drinking coffee. (Coffee and sparkling water go well together, both separately and mixed. There’s a reason some cafes serve a small glass of club soda with espresso, and there’s a reason why Manhattan Specials are so delicious. Don’t know what a Manhattan Special is? See the recipe below.)

My cycles on the brown liquid get shorter and shorter, the last time was a quick four weeks before it took me down, I got sick with a cold and kicked my habit in two nights. God doing for me what I can’t do for myself? Maybe. I have a feeling that my cold was coffee-related, strange though that may sound.

I know my body is sick when I lose my mental desire for coffee, but my physical body doesn’t accommodate; I get withdrawals in the form of migraines, which I have to treat with painkillers, which I’m loathe to do, or doses of caffeine. This most recent time I got up twice the first night to make lightly-steeped tea to alleviate the headache enough so I could get some sleep. Brewing tea at 4am because you’re an addict is no way to live. (I have a friend who needs to drink a Coke in the middle of every single night.)

Each time I kick coffee my mind spirals around it, starting wayyyy out there, far enough away that the idea of ingesting anything caffeinated isn’t even on the horizon; then I’ll start to drink tea on occasion; and eventually I find myself guiltily and excitedly ordering a cup of coffee. I witness the whole thing.

A few months ago, pre-relapse I enjoyed a hot chocolate at a stunning Starbucks “Reserve Bar” that I came across by accident; today I had occasion to visit as a full-blown partaker. A flagship-level store that has all Starbucks’ normal (“core”) coffees as well as a selection of nine “reserves,” all available to be brewed by any method – clover, siphon, pourover, or my favorite, “coffee press,” (they’re not allowed to say French press for some reason). I love the oily dankness of a good French press coffee, you can see the slick on the surface. And they also serve cold brew (but given the time-consuming nature of cold brewing, that selection is limited). 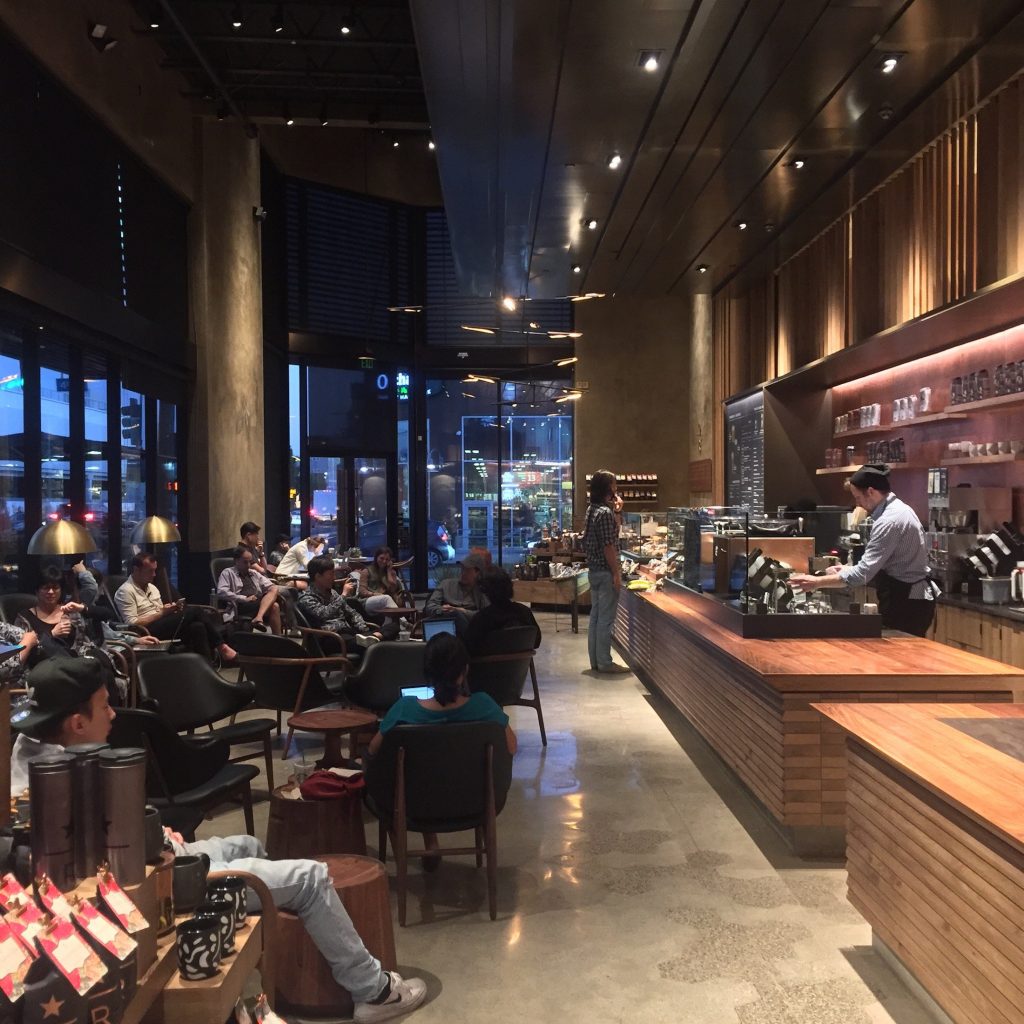 So after a nitro (best one ever, Ethiopian reserve of some sort) and a coffee press, they closed, about three hours earlier than I would have liked. I sulked back to my van on my bike.

One more reason bikes are awesome

Having a bike is pretty key to my vanlife experience, it extends my parking range enough so that parking is never a problem. Every neighborhood has it’s own different parking and street cleaning hours and if I don’t want to move the van multiple times a day, it takes some searching to find a space with acceptable parameters. With the bike it doesn’t really matter where that space is; distances that are untenable for a parker-walker are no problem at all – enjoyable even – for a parker-rider.

Until this past weekend I had two bike-carrying options: either removing a wheel and putting the bike on the roof, which was a ten minute process; or inside the van, which required me to rearrange the interior, moving tables out of the way and such, another 10 minute process. Neither one was the two-minute ideal I was looking for.

Depending on what I need at any given time, I’m usually headed to Amazon or craigslist. A bike rack is a craigslist item, and last Saturday within two hours of deciding I needed one, I owned a $30 rear rack courtesy of some guy in Reseda. Pros: less than one minute to put the bike on for a location change of more than a few miles. Cons: no locking ability. Been hacking this by locking the bike to the rack, but the rack is only held on by six vinyl straps, easily cuttable by an industrious, prepared thief.

After getting back to my van from the ‘Buck, I threw the bike on the back, locked it up as I just described, and got inside. It was only 10:30, what to do? Had had a full, early morning day, so I thought I’d try to get a good night’s sleep. I read a few pages of my latest LA-based literature, then put my head on my pillow.

First I dozed for a minute, then couldn’t sleep at all. Put on a podcast and got out some peanut butter. Was getting settled when my ears perked up – I thought I heard someone messing with my new used rear bike rack. I wasn’t certain because sleeping in a van in the middle of the city, there are a lot of noises not immediately identifiable.

Some more noise and I was sure someone was messing with it. Turned the podcast off, put the peanut butter down. Pulled down the rear window cover and despite the aural evidence, was surprised to see some dude grasping my bike. I would have liked to open the rear hatch from the inside but it lacks that ability, so I rapped hard on the window a few times.

His eyes opened wide but he didn’t look at me. He took his hands off my bike, jumped on his own bike and rode off. Yes, that was me facing him down.

He had gotten the velcro straps off and that’s it. Not sure if he had tried to pull the bike off and been thwarted by the lock or if I startled him before he got that far. I think the definitive noise I heard was probably him trying to lift the bike off, not seeing the lock.

I wasn’t scared at all but my adrenaline was surging and I lost my taste for the spot I was parked in. 1   But not for peanut butter, so I had a few more spoonfuls while I considered my late-night options, and I was off.

So here I am at 3am in Tom N Toms, where the music’s bad, they’re missing an apostrophe and I’m afraid you’ll think it’s me, and they’re out of green tea. But I learned a lesson about where I should be parking (nicer areas), I’m safe, my bike is safe, and I’ll forever have the look on that guy’s face as I rapped on my window and scared the bejesus out of him.

Around 4am I got up to stretch, Tom N Toms had gone from packed at 1am to four others. Walked out back to check on my bike and on the way back in ran into the security guard. Not sure how we got talking but we did. Omar was born and raised in South Central LA, he’s got two kids aged 15 and 10 and he works 10pm to 5am. Advised me that the homeless people in the neighborhood know his schedule and come 5am so I should keep an eye on my bike. I got the lowdown on the homeless people dynamic, which shed some light on the probable reason why the Starbucks Reserve Bar wasn’t open later and why there are no other 24 hour cafes. Thinking of Boulder’s Yellow Deli I recalled that most early mornings the crowd wasn’t exactly high-rolling.

Omar told me that this Tom N Toms was going to close permanently on Sunday, the building is being razed. Zero 24 hour cafes! Tom N Toms is looking into keeping one of their other branches open 24 hours but according to Omar the homeless problem is rampant, even worse at the other locations.

During our conversation about homeless people, Omar told me about service dogs for psychiatric disorders. Did you know about this? Just did some quick reading here about them bringing medication during episodes, being trained to bring a phone in an emergency, and other tasks.

And just like that it was 5am. Time for Omar to go home and for me to find a more suitable location to spend the night. Slept until 10:30am, the sun was shining, and it was a new day in LA. If only I could find a Manhattan Special….

How to make a Manhattan Special

I first came across this as a bottled beverage in…Manhattan. Once I became a bartender I made them regularly for myself and anyone who wanted one, which was pretty much anyone who had tried it.

Note 1: It helps of course if you have access to an espresso machine, this is still tasty with cold brew. You can also find the occasional barista or bartender willing to make one, especially if they’ve never heard of it before: “If you make one for me you’re welcome to try it.” Or something like that.

Note 2: Order is important. If you pour soda water on top of the espresso it will foam up way more than usual and probably make a mess. Trust me.

Thanks to Samantha Wolf for early feedback.